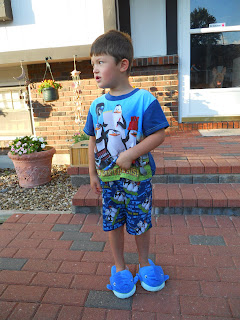 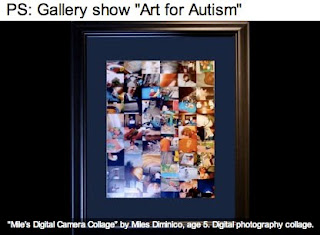 Just found out today that a Autism Art Auction in Columbia, Missouri that Miles was a part of was a huge success. He had two pieces in the auction and one framed collage of a bunch of digital images that Miles took did sell. It was profiled on a web site that wrote an article about the event. Miles is now a bonafide artist with street credit. Nice job, kiddo.

Here's a link to the full article.

One Weekend in June

A Camping Book - by Miles 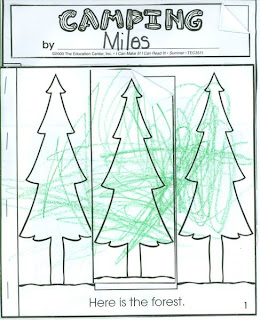 Miles in the Rain

A New Round of Jumping 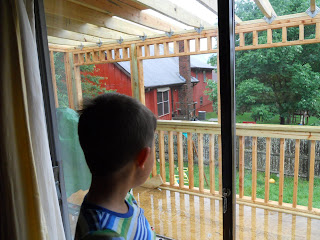 Miles' new favorite thing lately is seeing the neighbors cats on thir porch. He finally got to pet the black one last night and almost leaped in rapid succession into the clouds. Every morning we hear a loud 'LACK KITT!' or 'WHA KITT!" 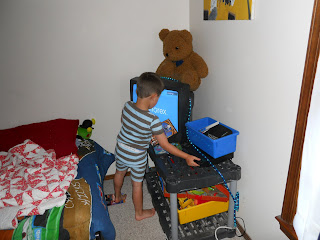 I know if seems like a very simple sort of notion that all kids will gravitate towards television. Not so with Miles. He has no interest in watching television as a sort of relaxing activity. He wants to stay busy and TV bores him. We are completely OK with this. When we were welcoming Miles into the world, we talked about how it would be nice if he didn't watch that much television. Over the years, he has watched several shows like Thomas, Yo Gabba Gabba and Sesame Street. But, none of this televised entertainment has really kept his interest. Recently, we put a TV with a DVD player in his room and he is now watching some films with complete interest. The other morning, he ran out of bed to turn on his TV to watch "Finding Nemo". I nearly laughed until I coughed at the fact that my 5-year old boy is show a tiny glimmer of wanting to watch TV. We shall see how long this interest will last ..