Miles had a full boar day of Halloween excitement this last Saturday. He started out at his school, Grace, and ended up in the basement of a church up the road. As he hoped around with sugar ripping through his motions, he gave most everyone a smile in his pumpkin attire. The coolest event of the day was during a cake walk in the church. Carrie had to essentially lead him by the hand over to the cirlce and get him started on his first ever cake walk. As they walked around in circles to 'rock lobster' blaring loudly, Carrie had to carefully keep a hold on his hand. When the music stopped and the winner was announced, I was quite shocked that it was Miles. At the announcement, Miles just looked stunned at the overload of information. His luck landed him a orange pumpkin cake matching his own digs. It made me ponder the pomp and circumstance of our small Miles as I'm sure most looked on wondering why he wasn't more ecstatic about his new cake. The truth is, Miles doesn't need luck, a contest or a 'win' to act ecstatic about anything in particular. His moments of spontanaiety happen when he sees fit and sometimes the little kid gets to win his cake and eat it too. 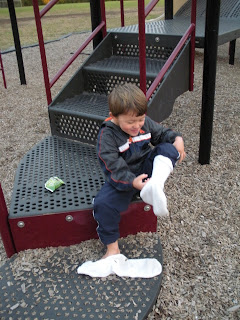 The other day I was getting Miles ready to go on our nightly adventure to the park. It's a time of sheer excitement and Miles loves getting his shoes and socks on for the outing. Earlier this week, I was getting ready to put on my socks and ready to help him put his on. Before that was to happen, I pulled one of my many joking moments with Miles when I told him he could try my socks on while I would attempt to put his on. As I slipped the mouth of his sock over three of my toes, he reared back in uncontrollable laughter. As he rose again red faced and still giggling, he began putting my socks on. Within seconds he had both on and they went up to the bottom of his shorts. He laughed as though this was the most amazing thing to ever happen to him. From there, my tiny joke became a new Miles sensational obsession. He had to take my socks to the park to fill with rocks and hold on to for lasting comfort. The following morning while getting him ready for school, he seemed completely disoriented. While on the changing table, he lolled around in an uncharacteristic silence until he saw my socks tucked in my front pant pocket. At that sight, he inhaled loudly and squealed for a pair of my socks. From there, it was sheer pandemonium as he got another pair of my white socks and tore around in kid glee. I'm again guilty of a good joke back firing, but it is hugely amusing to me that he gets so charged about things that are so mundane. Another pleasant anomolie of Miles and his cool march into a very unique and intriguing personality. Alas, karma is going to hit me hard when the weather gets colder and I try to find a good pair of white socks that I won't be able to locate. Miles will have all of them scattered around the house as I finally realize that the joke was on me the whole time.