Miles Has Taken Up A Fishing Habit

Horsin' Around at a Fair 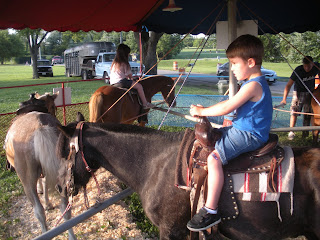 The End of Analog & Our Flat Panel TV

I wove Miles into a bit of a ceremony to witness the end of analog. Also, I put together a sort of a memorial to our broken 42" flat panel TV that Miles threw a Dora head at. A freaky kind of accident in a week full of things breaking all around us. A video has been tossed together to show the end of our beloved TV and the end of lovel analog. 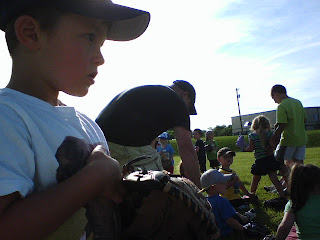 There are many times in a day that you have to relent and allow Miles to be the boy he is with the vision of the world that he wants to create. Rather than ram up against what you might what to do in an activity with Miles, you have to take in a deep breath and allow his brain to lead you in the direction it needs to go. Case in point .. the other day, I just bought Miles a new trove of paints. The next morning, he lept up and began chirping about how he wanted to start painting. So, after we collected all the paints, brushes and paper, we headed out back to get it going. But, there was also a blue Thomas train he was clutching in his hands the whole time we were on a scavenger hunt to do our paints. It was going to be the Thomas train that he was going to paint. At this, I let him do it. Rather than expain to him that paper is the surface he should use, I let him decide. I'm a steward of using a variety of surfaces when I paint, so why should I limit my boy. It actually turned out pretty nice .. he might just have a future in painting small, medium or huge trains.