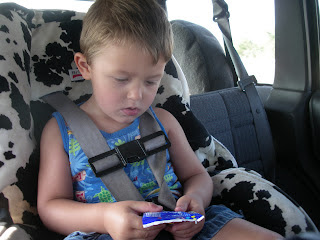 In the catacombs of the Miles 'Austism Spectrum' resides a very unique ability for him to get stuck on doing certain activities. Whether it's putting a CD in and out of a sleeve over and over again, there is always something that can happen wihout notice to get him stuck. Usually, it is the act of dumping water from one cup to another. Other times, he will destroy a granola bar to the point of not being edible becuase he doesn't want the package opened. If one attempts to open a granola bar or raisin box without knowing his non-verbal desire to have them closed, it will turn into a crying fit. A HUGE crying fest. But, I have to say, he gets over things in a relatively short amount of time. I have noticed at the Autism clinic that kids with straight up autism cannot get over things. It lingers and stretches in painful blocks of time. So, overall, I'm kind of endeared by Miles and how his brain works. Sometimes I'll stop and watch him for minutes and he has no idea that I even exist in the room. Over and over he does his cup thing or CD sleeve activity and is completely oblivious to the world. Stuck in his own fold of time and not wavering for a minute lest the world will hear him roar.

I finally crossed a personal bridge and have decided to produce an autism video highlighting Miles. It has been something I have thought about quite a bit over the past several months, but was reluctant to do it. My hesitation is due to the fact that I don’t want this to possibly be something that Miles would not like later on down the line. You know, mass dissemination of something like Autism or Developmental Delays is a slippery slope for a little guy and the road ahead. But, I feel as though Carrie and I can produced a quality piece of video that will help others like us either cope or seek needed services for a child that is not diagnosed. We are going to interview our behavioral therapist Nancy and a host of others to deliver a quality piece. As of now, I have been working freelance for Current.tv and the plan is to see if we can get this piece aired on National Television and hopefully provide a good dose of education and awareness about a huge mental health issue facing the kids of our country. As the numbers rise and many new parents have to face the reality of Autism, anything that can be presented well with the virtues of therapy is going to be a must.

Coaxing My Sense of Things 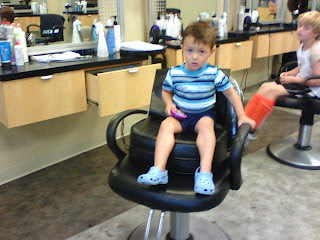 I was telling Carrie last night that the silver lining of having a son that is deveolpmentally delay like Miles is that we get to hold onto his childhood for a bit longer. I always hear parents bemoan that their kids grow up way too fast and that their childhood is gone all too quickly. As Miles hits his proverbial milestones in a crawling pace, we get to savor the little perfunctory toddler developmental moments with awe. This is the way that I convince myself not to go down the darker path that could lead to withering for Miles and the family. I have to see that half full glass teetering there on the tabletop as our Miles takes his time through this reality. He's a late bloomer - someone that ages well with the wine bottle and I can live with that notion. Sometimes these revelations are paramount to keep the laughter rolling and the therpay sessions relevant.
Posted by Miles at 3:29 PM No comments: Carrie and I used to talk about how it would be to drop Miles off for his first day at Kindergarten. Well, now that he goes to the ABC Clinic for 4 hours each Tuesday and Thursday, the Kindergarten clock has accelerated. Each Tuesday and Thursday, I drop Miles off at the clinic and hope that his little kid lip and wet eyes don’t go south. I know it’s the simple longing, but I want him to meld right into his therapeutic environment and tear down the hall towards his tiny autistic pals. There are those days that he lumbers up the steps with his red lunch pail in hand and goes straight towards a red watering can to water his favorite plant out front. The plant is singed brown from neglect, but he likes to go through the ritual. Then, there are other days that he clings to my chest and simply won’t let go. These are the days that are excruciating. Once I have him pried off my chest, he begins the whimper as I leave towards the front door. I always explain to him that I will see him soon and that he is getting the good therapy he needs to be better. His level of comprehension is such that this usually soothes him and I’m off. All of this is just tidy practice for when I have to really drop him off for his first day of Kindergarten after all of these hours hopefully get our boy mainstreamed for regular kid school.