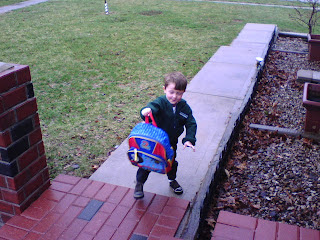 I have always told Zen that babies and infants are really the smartest creatures on the planet. They are natural sponges of our world that have not been bitten by the bug of inhibitions. And, I have always reiterated this with him when dealing with Miles. Not only that, Miles has this acute ability of understanding everything that is said to him. It's rather odd to have a person that you love so much and that is so close to you not able to string together a simple extract of words to let you know how they are feeling or what they want or how they did in school. All the time, I tell Zen to speak to Miles as though he is going to respond with words and never discount his ability to respond to everything you are saying with the appropriate reaction. The other day, for instance, I was telling Miles what we were going to do in our nightly routine before he was going to get into the bath. One of the things I mentioned in my list, was a 'bag', which immediately sent him to the kitchen. In all my words, I didn't know which one had triggered such a strong emotive response. As he tore by me, I looked up at Carrie and asked 'what did I say?'. She said, 'bag', and as soon as she finished the 'g', Miles had a bag in his hands. Lately, we have to be very careful what we say because the obsessive side of Miles will grind on something. Even if it's something as simple as 'lip stuff' for Carmex, it could throw him into a dizzying twirl of pointing, crying and grunting to get his hands on a tube of lip stuff. This, as Carrie has noted, is one of those things she is not ready to give up to the small Milo boy. She deserves to have her lips moistened without Miles going crazy. And our simple gesture of words can do that. In summary, I felt it necessary to let you in on the most brilliant of humans in our household, Miles, and how he processes our simple communication plans in the most complex of toddler thought. 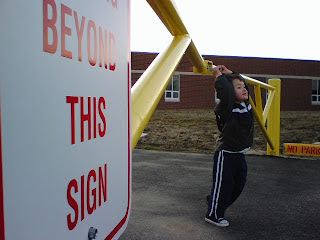 The global initiative to recognize Autism on its inaugural day was a bittersweet occasion for me. While I was content with the notion that the world can recognize the Autism Spectrum, it was hard to watch the stories unfold on the TV. One such show was on Sundance late last night and Carrie had to turn it off. Many of the images, behaviors and feelings are too close to home to get immersed in. Instead, we all watched Smallville and continued to cultivate our own family TV show. Overall, I like the fact that a more global awareness can help all families get the needed funding to cover expensive therapeutic costs. That is huge in my mind to plod forward in the pursuit of a bit of easing for families trying to help their children. Recently, Carrie and I agreed to be a part of a video that is trying to secure funding for something called Bryce's Law. It is a bill currently going through the Missouri Senate to provide funds to families that want to send their children with special needs/autism to private schools of their choice. The link to that video is here: http://www.youtube.com/watch?v=Sp7dbnNzEu4 .. Movements start with small pebbles and mount into huge boulders. Hopefully that's what we can watch unfold with further autism spectrum awareness.
Posted by Miles at 8:29 AM No comments: