Lately, there have been two songs soaring through the Miles nomenclature. First, he has to hear a song called 'go-go-go' by 'The 88' when in the car. I really love this band, but he's got me to the point where I can't listen to them casually for a long while because I hear that song so much. The other song is 'piggies' by The Beatles. I had to halt the repetition on this one because it would be sacrelidge to do that to the White Album. At any rate, we dug the recent snow and got our feet cold and wet with all of it. A bit of a video below recapturing the surprise winter fun with Miles .. enjoy.

On the first full spring weekend around the house, Miles made his rounds in style. Between the pool and the mud, he got his hands full of paint. I put a little video up to compound the warm weather Miles fun .. Enjoy. 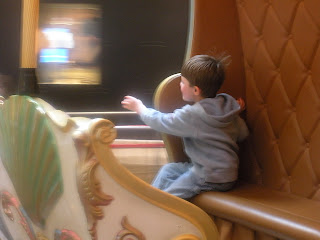 In our IT shop in the school disrict I work at, I answered a knock to our door this morning and had a teacher shoved me a note scrawled on a white writing pad. She was tapping a pen to a request for me to meet her in a conference room to help get a DVD player to work. As I nodded calmly, we headed over wordlessly to the room. I didn't ask or delve any further into why this teacher, who typically speaks in vocal words, wasn't speaking to me except with a medium sized pad of paper and blue pen. As I was tinkering with the cables and TV, she wrote a couple of new directives which I immediately nodded and went along my way. After she wrote that she couldn't talk for 2 weeks due to a strained vocal cord, I smiled and told her my story. I said that my 4 1/2 year old son was non-verbal and I have an easy time decoding gestures, pointing and a host of non-verbal cues. At this, she gave me a broad smile as I went along figuring our how she was going to project her DVD with people speaking to a room of folks that would be silent.

After careful thought and diligent questioning, Carrie finally figured out what Miles wanted .. the video below explains ..

Yesterday I learned another huge lesson in the perpetual language interpretation dance that Carrie, Zen and I have to do with Miles. While in Martin City getting Bar-B-Que at the Jack Stacker, Miles began getting very excited at something across the street. He was pointing and hemming about something to do with water and his eye. As I asked him what he wanted, he pointed at a regular tan building across the street in excitement. All the while, he kept pointing to his eye. As I strained to gain his meaning, I was lost. We had no history with the building across the street. It is a home remodeling business and there was nothing more in the frame that was giving me a clue. So, we went in and got our food and made our way back out. I explained to him as we rounded by the building and sped out of sight that I was not sure what he was saying and that we should talk about what he was trying to convey. We could meet that communication compromise. The whole way home he was moaning ‘eye’ and pointing towards the back of the car. This continued in brief intervals throughout the night. Through all of our collective digging into the mysterious riddle, we may have conjured up the notion that he saw a billboard for a commercial that included water and eye wear. Other than that, we are lost and likely going to have to take him back to that building, let him out and allow him the opportunity to solve our riddle and let his small communication dream come true. We’ll let you know if we come into the ‘know’ ourselves. In the meantime, I have attached a raw video that Zen boy recently shot of Miles going though a set of words and sounds that Miles has mastered.

As we wait for spring, we begin invent a bit of our own spring. Lately, we have been taking Miles to the newly opened pool up the way and he loves it. With new wings on his arms and another year tacked on, he gets better at wading around in the waters. A good part of why we are doing this is to tame the tempest that has been flaring in little Milo of late. With age, a new range of emotions have been boiling to the surface and we are fully engaged in helping him explore his speech-less world in more effective manners. So, as we brim in anticipation for more warm days, we give you a brief video glimpse of one of Miles' favorite outdoor activities .. we're not sure what it's called, but we do know how to describe it. This is Miles mixing a variety of bubble flavors into a big, fancy mix. The end result is a huge mess that he loves and is uniquely him in all his little kid ways.