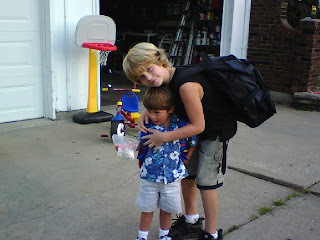 Today was the first morning of school for both Miles and Zen. Last night, we met with both of their teachers and Miles was unexpectedly shy when going back into his home room. He clutched at me hard and flashed his newest lower lip he has been working on lately. He finally snapped out of his kid shell and was again ecstatic to get back on the bus this morning. On another note, Carrie and I put the finishing touches on an illustrated essay that will be in a book called My Baby Rides The Short Bus. The final contractual agreement has been signed and sealed. This anthology of essays from parents with children that have special needs or are in the autism spectrum will be out nationwide in Winter of 2009. For an unedited version of this essay, click here to read - Enjoy ..

Over the weekend, Miles was desperately trying to tell us that he wanted something before going down for a nap. It was a click-click sound he makes for ice with a woosh of air between his front teeth. Then, he was snapping his thumb/forefinger in a rapid succession. Carrie and I were both perplexed. Even after we let him up to parooze the house, he couldn't find it. So, the nap happened and he hopped up looking for his unsignable object. It ended up being a strip of stickers and it made complete sense after he got them. Several months before this, he was making his own sign for a digital camera he likes to hold and snap shots with. Again, we couldn't figure out what he was asking for. This time around, I spent some minutes going around the house with him asking questions until it dawned on me that it might be the camera. It was a wave of complete relief to see him face beam with a communication conquest. Lately, we have been pushing more and more for him to use his verbal language. He has been blossoming. Lately, he's been saying 'hi' and 'bye' spontaneously to strangers in public, along with saying the word 'blue' for various things from gum to slides. In closing, Miles got a published profile in a newsletter for the Children's Education Alliance. Click here to view (on page 3) ..