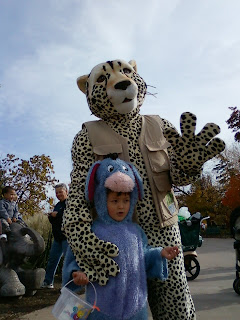 Over the weekend Miles began asking everyone 'why?' much to our amazement. We were so overjoyed to hear him utter that question that we couldn't stop explaining to him everything he wanted to know. Whether it was a logical explination to something he knew would be a 'no' or something a bit more plainative. We are ecstatic about the unraveling possibliities of his very small word question and the huge world of verbal possibilities we can explain to him. Also, we hit round 2 of the Halloween marathon taking place this year. He had a trunk or treat event in Belton several weeks back, then a Boo at the Zoo this weekend and a night of passing out candy on Halloween at the house coming up very soon. It's like being around a Beatle when people in public see Miles waltzing around in his Eyeore costume. People go crazy talking to him and screaming from far away when they see him. Luckily, we came across the Eyeore costume this year because all he said to us was that he wanted to be a donkey. It's his first year not being a pumpkin. At any rate, another shot of the rock star strutting abouts in his frestive donkey gear.

Offical Miles Artwork on a Card Via Grace 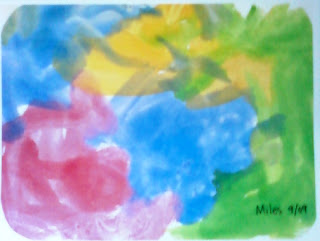 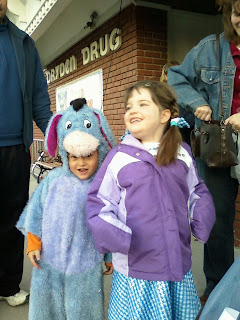