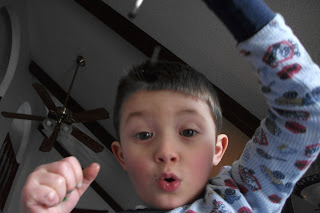 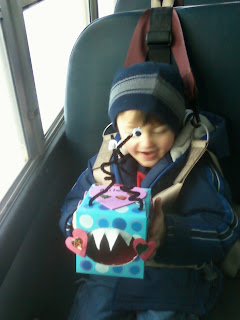 Miles will always be one of the most memorable kids. I hope I'm invited to his high school graduation someday! And college! He comes into our speech room with so many stories now. I am able to understand much of what he is telling me with his combined words and gestures. Miles is so expressive! One of my favorite recent stories was when we were working on wet and dry, so I poured water on one of his hands and the water also got on my knee and the floor. His eyes about popped out. The next language pullout day he really warned me about that activity by pointing to the water jug and saying "wadu-no" (you should have seen his face, heard his intonation, and watched his head shake no), and he then pointed to my knee and the floor. We both cracked up.
Posted by Miles at 8:48 AM No comments:

Miles is live on CNN.com

Autism parents haunted by question: Why? 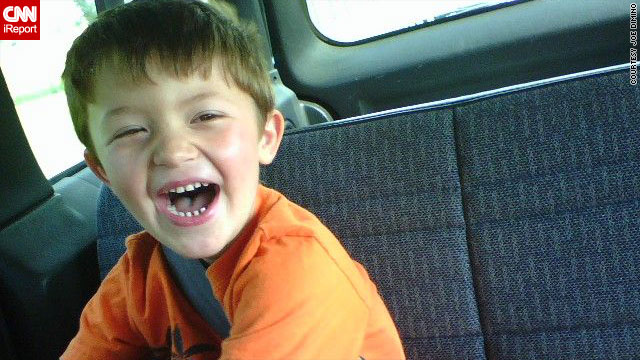 The father of Miles Dimino said the recent retraction of a controversial study by The Lancet only made him more disillusioned with the medical establishment.
STORY HIGHLIGHTS

(CNN) -- The retraction of a controversial study that suggested a link between autism and a childhood vaccine has been little comfort to Joe Dimino.

Dimino, whose 5-year-old son has a type of autism, said it only made him more disillusioned with the medical establishment. While Dimino does not believe vaccines cause autism, he's not entirely convinced the shots are harmless.

The now-discredited study published in the Lancet in 1998 raised the possibility of a link between autism and the measles, mumps and rubella vaccine. The study had become a rallying point for many parents questioning the safety of childhood vaccinations.

"We feel like we're getting yanked around with this information -- how can you say something and say sorry 12 years later?" said Dimino, of Belton, Missouri. "That's the way it feels."

It left him feeling "more mistrustful of both 'communities,'" he wrote in his iReport.

Even without the vaccine-autism controversy, parents of children with autism live with a constant question that no scientist or doctor has been able to answer: Why?

Why did this happen to my child? What caused it? Will he or she get better?

"What happens with a large number of families is they get a diagnosis and there are no answers," said Patricia Robinson, who is a therapist for people with ADHD, autism and Asperger's syndrome. "And what I usually see is parents start really researching for information."

Dimino's son Miles had developmental delays that made his parents suspicious. He had trouble picking up objects. At age 1½, he crawled. He could barely spit out words or phrases and had trouble talking.

Has autism touched your life? Share your stories, thoughts

After learning that Miles is in the autism spectrum, Dimino and his wife browsed libraries, ordered countless books and spent hours online learning about autism. Watch Dimino's iReport submission

Maria Collazo of Belleville, New Jersey, spent hours on YouTube, watching everything she could about autism after learning that her daughter, Madison, had the condition.

She started wondering whether her hours at work, usage of the Blackberry and screen time during her pregnancy contributed to her daughter's condition.

"I questioned all things," she said. "Did I eat something I shouldn't have? Did I expose myself to something? You question yourself. You question and you don't know -- and it's like a state of mind."

It's human nature to want to know why and some people do better on certainty than others.
--Dr. Judith Miles, professor of pediatrics and pathology

It plunged her into depression and more questions.

"There's no evidence to say the child is autistic because the parents did something wrong during their pregnancy or early years," Robinson said. "It's common human nature to look for causes and it is hard on parents, because they do blame themselves."

The constant questioning is understandable, said Dr. Judith Miles, associate director of biomedical programs at the Thompson Center for Autism and Neurodevelopmental Disorders at the University of Missouri.

"The things that keep me awake at 2 a.m. are the things I'm puzzling over and things I don't have answers to," Miles said. "I think the reason that people look at vaccines is because of the time correspondence."

I think the reason that people look at vaccines is because of the time correspondence.
--Dr. Judith Miles, professor of pediatrics and pathology

The symptoms of autism become more apparent around the age of 2, which is around the same time toddlers receive their vaccinations. This has fueled theories that the childhood vaccinations cause the disorder, but scientists say the timing is coincidental.

"That temporally makes a lot of sense and that's why some families hold on to that," said Miles, a professor of pediatrics and pathology. "I assume it's a coping mechanism. We all have coping mechanisms."

She recalled one patient who repeatedly came to the clinic with one theory after another about why her child had autism.

"It's human nature to want to know why and some people do better on certainty than others," Miles said.

Collazo still wonders: "I wish I knew what it could've been. I really don't know." View Collazo's iReport

She does not believe vaccines contributed to Madison's autism and tries to look toward her progress.

Her 3-year-old daughter does not speak and hardly communicates. She cannot call Collazo "Mommy." She recently started using a sippy cup and began to clap. She also spins and bites herself to the point of bleeding and bangs her head against the wall.

"I have a lot of faith she will get better," said Collazo, an iReport contributor. "I also have to mentally prepare myself that she may not, but it doesn't matter as long as she reaches her personal goal, I'm happy. I know she knows who I am. She loves me -- that's really what's important."

While the Lancet retraction may not sway the parties entrenched in their beliefs, Cynthia Falardeau, an iReport contributor and parent of a child with autism, said parents have more in common that they realize.

"I know that the parents in both camps love their children dearly..." said the Vero Beach, Florida, resident. "As much as parents of children on the spectrum of autism are divided on the topic, they are united in their love for their children." View Falardeau's iReport